For Christmas Grma M and Grpa T gave "adopted" orangutans to the kids for Christmas. Claire is now an adoptive parent to Merah at the St. Louis Zoo and Benjamin is one of Sugriwa's adoptive parents. They named their stuffed counterparts "Sugar" and "Hungry" and they have moved straight to the top of the stuffed animal totem in our home. 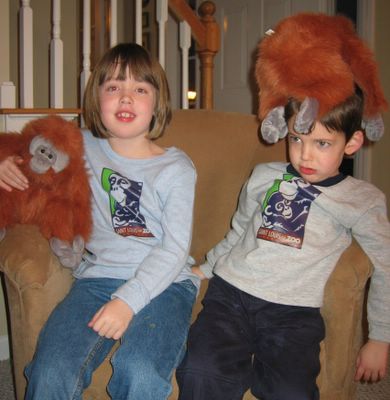 The adoption kit also came with t-shirt iron transfers. Here they are with their new duds. We visited the St. Louis Zoo on a very hot day this summer and only caught a quick glimpse of the orangutans, but I think they are fascinating and this was a super gift! (Who needs more legos, really?!)

Grma K and Grpa J must have been thinking along these same lines at Christmas time because they gave us a membership to the Dallas Zoo. How cool is that? We love zoos and have definitely missed that living here in Maine.

Two boxes came from Amazon today. I'm not sure I can wait until tomorrow (my birthday!) to open them.

Project Runway
Oh my goodness, that pink stretchy shirt was such a riot. Poor poor Emmet. I say that, of course, in a you-deserved-to-go sort of way.

Nick?! What were you thinking with gray and beige? Your outfit could have been a slam dunk if you'd done it in something gutsy! Lime and teal! Orange and fuscia! Even baby pink and baby blue would have been better.

How funny was Sacha when she said she liked the rucheing on the front of Santino's creation? She really had to stretch to find anything positive to say.

Lost
Did Sawyer call the guy in the jungle Zeke because he "knew" his name, or was it just another of Sawyer's nicknames for people he encounters?

Love Monkey
Loved it, but I completely missed the dialog in that one scene because I was so excited to be hearing Pretty Vegas.
Posted by Deborah Boschert at 2:19 PM

I think Sawyer just gave him a name but the guy did give Sawyer (James) a "look".

Dull colors and DULL designs. Didn't she have on a bright BLUE when they met her???? Color will always carry a weak design.

Maybe Santino came to New York and left his bottle of Prozac at home? He is getting weirder as the show goes on and his exploding cow costume was the worst.

Hi Deb, the t-shirts and orangutans adoption idea is genius. I missed Love Monkey but a friend told me not to miss it next week, that it was great fun. Just wanted to wish you a very Happy Birthday. Hope you're doing something fun! Hugs, Dee

I love the orangs, and especially Benjamin wearing his....what a *boy*! The membership to the Dallas Zoo is inspired...what a wonderful gift! We were members of the Seattle zoo for one year, even though it was a four-plus hour trip one way, which meant an overnight (and therefore expensive) trip off-island to the mainland and Seattle to go visit. We all had our favorite spots...it was great!

Love Monkey is finally on? There have been so many ads I tuned them out......glad to hear Pretty Vegas is on that, too...way to go JD!

Happy happy happy (and I went shopping today for guess what!) birthday t omorrow and can't wait to see you Saturday,

Those are the coolest stuffed animals! Do they get to watch their adopted orangutans via webcam? the zoo here did that for a while with the gorillas.

i was trying to recall if Sawyer and Zeke had met for him to know by name...did he tell him when they kidnapped Walt? or did the ex-cop tell him about the "others" and thats where he picked it up?

Have a glorious birthday. Have you ever read the book On the Day You Were Born by Debra Fraiser? Its a wonderful book about to read aloud and is appropriate for children and adults.

HAPPY BIRTHDAY TO YOU!!!!!
HOpe you get tons of goodies today
Sandy

Happy Birthday Deb! My oldest son and you share the same birthday. He's now 14! Yikes, where does the time go?
What a great idea about the orangs and the zoo.
Have a great day!

Hippo Birdy! When I get a moment, I will send something in the mail - hopefully before you leave town!!
What a great idea for the gkids. When we get to Portland, we want to get a membership to the zoo so that we can take M & M often.

Happy Birthday to you.
I am not big on television, but I am stuck on Project Runway. Love it. I really liked Daniel Franco. And I loved that he (as leader) took complete responsibility for his work.
Anyway, Santino's skating outfit is a complete mess. I don't know what to make of it and he is getting weird......or maybe that is the way it is being edited for DRAMATIC purposes.
Alma

The orangutan adoption's a great idea!

I love Project Runway! Santino's outfit was such a mess. I agree with Sacha though. The ruched leotard was gorgeous. Too bad he ruined it with all that trim.

I enjoyed Love Monkey too...