For the third (COLD!) year in a row we visited the Freeport Winter Fest which includes snow and ice carving. It was way cold and windy. We didn't stay long.

The theme was "The Sky's the Limit." One team carved an air craft carrier. 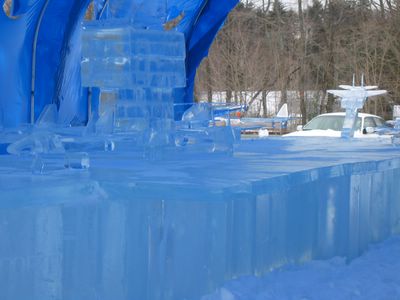 It looked really cool in real life. You just can't get a feeling for the size and detail in these pictures. Everything just blends into those blue backgrounds.

I know a little bit about air craft carriers... and it seems to me that plane on the end is either landing way short or pointing the wrong direction to be taking off. Can you see the helicopter in the middle of the picture?

Here's a close-up of a few of the jets. I think they are rather non-descript. There were definetely not any S-3s. (My husband is a former S-3 pilot.) 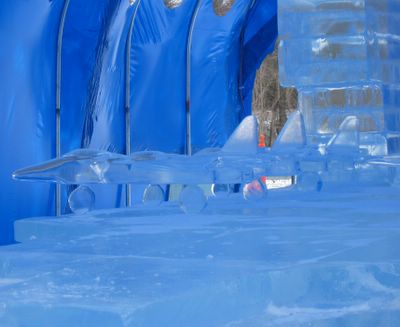 There was also snow sculpting. 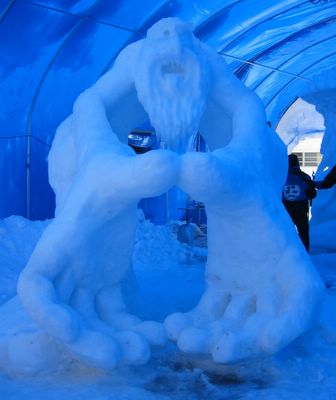 Also Jack and the Beanstalk. Carvers were adding veins to the leaves while we were there. 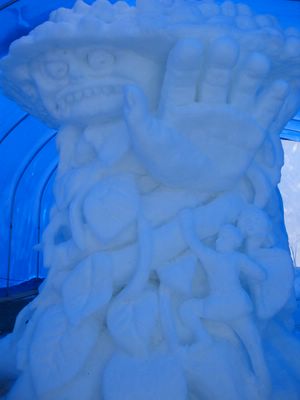 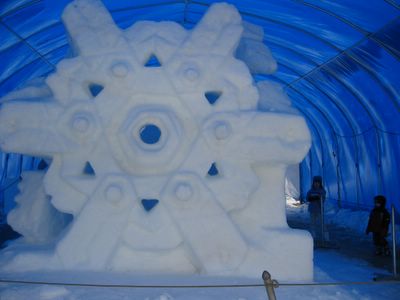 On the way out Claire and Benjamin made a fast friend with a girl building a wall of snow bricks. 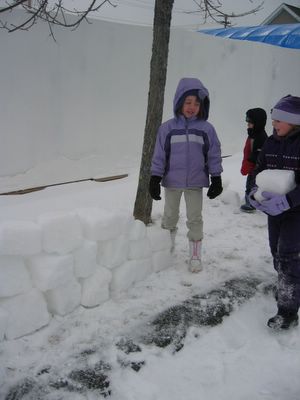 You can see pictures from our trip to the Winter Fest last year here.

I can only imagine what we'll be doing in Dallas next January.
Posted by Deborah Boschert at 1:56 PM

that shade of blue is awesome!

The giant and jack and the beanstalk are pretty cool outside of being cool as in cold :)

Great photos and to think I was complaining about frost this morning!

That is too cool! I've never seen anything like it. And if next January is anything like this January, we'll be having absolutely gorgeous, perfect weather...nighttime lows in the 40's or 50's, and daytime highs in the 70's, and not a single cloud in the sky!
Total culture shock!

Well, I CAN tell you, you will NOT be looking at ice sculture in Dallas in January 2007!

I love this stuff...but why the tent? Oh, you guys actually get sun this time of year, don't you? In Houghton, MI for St. Urho's Day, they have snow sculpture competitions. It is so much fun to drive around, especially on the campus of MI Tech....can you imagine....all those engineering students and all that snow to carve?? It's a hoot.

I still can't believe you guys are moving to the Big D. I would LOVE to go to the West End Warehouse again. There was a jewelry/art store there that had a painting.....