Jeff came home this weekend. Yeah! Claire had begged him to come home so he could join us for her field trip to Chipman Farm's Pumpkin Land. It wasn't the manipulative self-serving begging that a teenager might do. This was honest "I really want you to come home" begging. And it worked. We also felt Benjamin needed some additional dad-time and I needed another grown-up around for a day or two.

The field trip was wonderful. It was the perfect fall day (unlike several weekends past and the foreseeable future). We could see snow-covered Mt. Washington (tallest peak in New Hampshire) on the horizon. Spectacular. Pumpkin Land was a gas. How can you go wrong with giant hay bales set up for kids to jump across? Unless you mind getting kicked in the head by your classmates. We also enjoyed a hay ride where we saw broccoli, cauliflower, cabbage and corn growing. Each kid got to pick a pumpkin to take home. So now there are six on our porch. (Not because we have six kids, of course. But, because we had four pumpkins to start with.)

Claire scored two goals at her soccer game on Saturday -- another beautiful day! I did lots of sewing on Saturday too. More on that later.

Saturday night Jeff and I had a date. I wore my red pashmina and we went out for Indian food. This is a big deal (the Indian food, not the pashmina, though it is warm and lovely). Seriously, we have not been to an Indian restaurant in more than 12 years. When we lived in Florida, Jeff got spoiled by our wonderful friend Supriya's mother's cooking. Now he thinks the only Indian food that is fit to enjoy is a meal made by Mrs. Krishnan. I have lived with this phobia of his for years, but I put my proverbial foot down this weekend and said, I want Indian. It was delightful. Our little town of Brunswick actually supports two Indian restaurants. I think we chose well and enjoyed a great meal. Jeff says he actually enjoyed it too. But I'm not convinced he'll be willing to go out again for another 12 years.

Then we went to see Elizabethtown. Oh dear. It was awful. Truly horrible. The kind of movie that you laugh at not because the director was trying to create a funny scene, but because the effort is so miserable and out of place that you must laugh. Of course, that's just between the long stretches of boring.

I made hot cookies when we got home and watched the first two episodes of Lost. The evening was easily resurrected.

Sunday we heard a wonderful sermon by former govenor of Maine, Angus King. He's a long time member of our church. Today was the day Maine churches were supposed to profess their commitment to anti-discrimination. So Angus preached about God and politics. Yeah, Angus! I want him to rise up and lead the Christian Left! 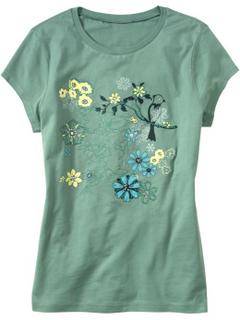 Then we ran some errands and I bought this shirt at Old Navy. I saw it earlier in the season and thought I was too old to wear something like that. Then thought about it for days and wondered why I was possibly censoring my own wardrobe. It's short sleeved so I won't be able to wear it for awhile, but when it warms up (or when I move to Texas) I'll be looking cute and spunky!

I'm also entranced by the new line of chocolates developed by Target called Choxie. They are contemporary and beautifully packaged. I can't believe I didn't buy any, so I can't report on how they taste.

Speaking of the Christian Left, I'll be watching West Wing tonight and dreaming about whether there exists a real-life Matt Santos.
Posted by Deborah Boschert at 9:08 PM

Oh, yeah - wouldn't that be great - I'm watching right now. I'm in love with him - don't tell Stevie!! (Matt Santos, that is) So nice to hear of your lovely week-end. You are not too old to wear that shirt - it suits you.

It sounds like you had a wonderful family weekend. The shirt is one of my favorite colors (sage, isn't that what they consider sage now?). I wouldn't wear the embroidery on top for myself, though. Too much boobage. Thanks for the movie reviews, too. And Indian food. I totally understand Jeff's reservations. I love it and am able to only make three dishes (samosas, saag, mulligatawny soup) and mango chutney and naan. We were out chowing down at Jewel of India on Friday night. YUMILICIOUS. We won't go to any other place because we don't like the food. We pray daily that the chef won't get mad at his brother and leave.

Ah yes...Jimmy Smits was a hunk on LA Law, and still is...one of the ones that gets better with age. I DO believe that there are a FEW really great politicians out there...to bad the slimeballs get all the press. And I agree with Gerrie...the shirt is just right!

Pumpkin land sounds so fun! We haven't made the journey there yet--I'm terrified of the crowds. Ah!

Pumpkinland and Indian food both sound great and I LOVE Avatar!! There are new episodes? YES! Um, I mean, yes...

On my Big Trip to Target, I succum to the Choxie. Intensly chocolaty, but also a bit waxy. You could tell they were a Target line, and not from a candy store. Overall, not worth the price.
On the other hand, Shawn and I have just begun watching Lost (from the beginning) and are somewhat addicted! Wow! Better late than never, I guess...