Not much lately really. I go in waves of reading. Lately it's been low tide. Which is fine with me. I think the last book that I read and really enjoyed was The Secret Life of Bees. I have Sue Monk Kidd's new book on request at the library.

But for now, I'm actually reading these... 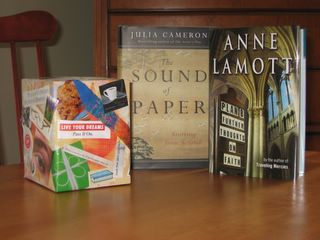 My friend Helen invited me and several others to read Julia Cameron's book The Sound of Paper and have an online discussion of the book. We kicked off the first chapter and exercise today. I have The Artist's Way on my bookshelf, but haven't even opened it. (Hanging head in shame.) (Not really.) I think it's going to be good. The exercise was to make a collage. She suggested using 20 magazines and a giant piece of poster board. (Puhleeze.) I used about 6 and an old kleenex box. I think we were supposed to be picking images that "spoke to our soul" in some way. Hmmm. I mostly just chose things that had some interesting design. Or were loosely inspirational. I think you might be able to make out the chocolate chip cookies and the cup of coffee on the side facing out in the picture. Make your own assumptions about those choices.

And I'm also reading Anne Lamott's new book. Her earlier book Traveling Mercies is one of my all time favorites and I think this will be equally funny, thoughtful, and inspiring... if I can get past all the blather about "the illegal war." (You should not read anything into that about whether I'm for or against the war. No one is for war. But I get tired of extremism on either side.)

The first chapter is titled, "Ham of God." She writes about winning a ham at the grocery store. "What on earth am I going to do with 10 pounds of salty pink eraser?" she asks. She runs into an old friend in the parking lot who is crying and at wit's end and with no money for gas or groceries. Of course, Anne hands over the ham. God works through people.

I also read an interesting interview in Allure magazine (while I was at the gym on the cross trainer) with Naomi Wolf about her new book. I have not read any of her other books about feminism, eating disorders and body image, the state of obstetrics and gynecology and motherhood or sexuality, nor do I intend to read her new book titled, The Treehouse : Eccentric Wisdom from My Father on How to Live, Love, and See. (At least not unless I can get it from the library and they don't have it yet. I checked.) But it was a great interview. Apparently she is finding some balance between writing about big important stuff and being involved in grass roots activism and just following her own personal passion to write poetry even if it has no measurable effect on the world.

You mean it might be ok to just make art and not worry about the other stuff?
Posted by Deborah Boschert at 5:45 PM

After reading about The Secret Life of Bees on so many blogs I finally bought it and am enjoying it very much. Only 30 pages to go! Thanks for all the wonderful recommendations.

I LOVE! Anne LaMott's books. I started with Bird by Bird. If you haven't read it yet, you must!

You probably know that she teaches creative writing and that is what Bird is about, but the process and work ethic is the same for any of us trying to be creative. Anytime I get momentarily overwhelmed by a project, I just say to myself "bird by bird". Baby steps will get me there eventually, but only if I take the first one and then the second one.....

I've opened Artist's Way, but that's about it. It's been waiting on the shelf for quite a while now.